The Other Half of Macroeconomics and the Fate of Globalization by Richard C. Koo, April 2018, John Wiley & Sons Inc, New York, Pp 320 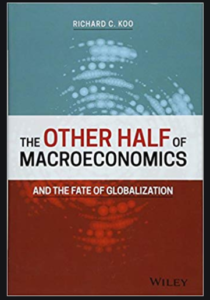 “The Other Half of Macroeconomics and the Fate of Globalization” by Richard Koo is a fascinating read for anyone interested in the issue of global macroeconomics and its linkage with capital markets. While the book may end up being repetitive at times, the concept of Balance Sheet Recession (BSR, which the author has been proposing for an extended period) is fresh air in a room fully choked with monetarists. The author doesn’t mince words when it comes to his views on modern-day economic theory and profession. While the author’s discussion is focussed primarily on macroeconomics, with a little effort, one can extrapolate why the financial markets have been performing the way they are.

The book tries to cover a lot of ground within less than 300 pages. As a result, some analysis is condensed. The author sees BSR as the cause of world wars, stagnant growth and the rise of populism. Admittedly, this may have been one of the potential reasons but to the author, it seems like the panacea for all the economic problems. The compressed space also leaves no space for topics that may be pertinent – declining populations and the increasing role of technology. Some of the recommendations are vague like setting up an independent commission to scout for projects which can be financed by the government and can pay for themselves. Experience suggests, the task is 1000x more complicated than the space the author gives to it. Nevertheless, the book proposes a new framework for economics and provides ample evidence in its support. It may not be a final word into itself but throws abundant light on what may be getting missed and hence needs to be paid adequate attention.

The author’s central thesis is that most of the developed world is in stage three, where lenders are willing to lend but there are no takers, especially for the real economy. The reason this is happening is that these countries are in “pursued” stage of economic development (more on that later) and borrowers are either mending their balance sheet post-GFC or are not finding a good rate of returns in their home country. If such is the scenario, no magnitude of monetary policy tweaking can cause them to return to take more credit. The only thing monetary policy will do is generate asset price bubbles as money created gets diverted to financial markets. With the private sector in savings mode and refusing to lever up, both growth and inflation remain low. The problem can only be solved if the government comes in to boost aggregate demand through fiscal measures.

The author discusses this in the context of Japan, where timely fiscal measures have saved Japan from deep recessions like the 1930s great depression, and nominal GDP has at least remained flat, if not fallen. He also points out that post-GFC, the private sector has been saving and has been reluctant to take leverage in both the US and Europe. However, when it comes to the fiscal side, the US hasn’t hurried up into fiscal consolidation like Europe, and this partly explains (for the author thoroughly explains) why the US has been doing much better.

A new concept which I learned from the book was the concept of Lewis Turning Point (LTP) an idea proposed by Sir Arthur Lewis (who won the 1979 Nobel Prize for Economics) which focusses on labor supply. LTP is a point in the development of an economy where labor moves from being in surplus to scarce. The author develops this concept further and suggests that there are three stages of economic growth–

The author explains how Japan pursued the western world in the 70s/80s, then, Korea & Taiwan pursued Japan and now China is pursuing the rest.

According to the author, appropriate macroeconomic policy is stage-dependent. It is only in stage two where wage and price inflation becomes a real problem, and monetary policy is potent. On the other hand, fiscal policy needs to remain tight as it will add further inflationary pressures and crowd out private investments. In the other two stages – stage 1 and 3, fiscal policy is more appropriate. In both phases, it needs to overcome stagnation by spending on infrastructure and creating avenues for investments and employment.

An additional challenge in stage three is maintaining the overall prosperity of the country. The author argues that it can be done only if innovation is encouraged through deregulation and tax-cuts. It may be contrary to today’s call for higher taxation, but the author cites the example of the US doing better than Europe post-1990s as the evidence for his argument. That the rising inequality is an integral part of the pursed stage may not do down well with everyone, but to the author, it is an unavoidable consequence and an expected outcome.

The last two chapters critique the current paradigm of global macroeconomic policy. While the author comes out in favor of free trade, he is not convinced about the utility of free capital flows. If anything, he finds free of capital flows detrimental to economic conditions. He forcefully argues that freedom of capital tends to reinforce trade imbalances (instead of balancing them) and dominates trade flows in monetary terms by a ratio of 20 to 1. As a result, capital flows undermine the effectiveness of monetary policy and the adjustment of exchange rates. Even on trade, he has harsh words for WTO as it doesn’t explicitly take into account the trade balance situation. Ignoring this critical aspect of global linkages, allowed China to put in high trade barriers in the name of being a developing country, while simultaneously running substantial trade surpluses familiar mainly to the developed world.

With economists trying to find the solution at wrong places and trade/capital flows leading to job losses and rising inequality in the developed world, he finds ample reason in support of Trump’s protectionist policies. The author’s argument, however, suggests that as long as capital flows remain free, trade balances are not going to matter much. Globally for the time being, the reworking of capital flows arrangement is off the table (including for Trump) and new trade arrangements may not make much of a difference.

The book ends with advice for economists to do away with the fascination for mathematical models. Out of sarcasm, the example which he gives for why maths is not good for economics is indeed witty:

The author warns that unless economists give up their infatuation with mathematics and return to plain speak, the whole subject, and the profession, maybe in jeopardy.

To conclude, the book brings new ideas and thoughts which seem to have been ignored by the mainstream so far. But in the end, 300 pages are far too little to cover all the detail and there is an element of oversimplification when it comes to history like world wars. Also, watch out for a bit of self-aggrandizement – the author seems to have never given a wrong view and a wrong call.