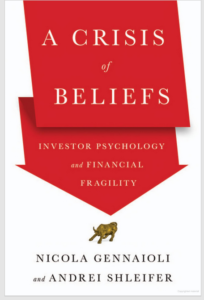 “A Crisis of Beliefs” by Prof. Nicola Gennaioli and Prof. Andrei Shleifer marks an important development in finance research. In this book, the authors analyse the role of beliefs in financial markets. Using actual survey data, they provide strong evidence that contradicts ‘rational expectations’ and ‘efficient market’ hypotheses. Not only this, they go on to develop an “empirically motivated and psychologically grounded” model of expectation formation and then using the model to show how overly optimistic expectations led to the 2008 crisis and more generally can play a role in creation and bust of credit bubble.

Prof. Shleifer is well known in the world of Behavioural Finance. Just like no smart beta/market anomaly paper can be written without citing Fama and French, the same goes for Shleifer and his long- term collaborator Vishny when it comes to behavioural finance.

In some sense, you don’t need to read this book. Market participants know well about the phenomenon of optimistic estimates, whose study is the cornerstone of this book. It is an annual phenomenon where annual earnings estimates start high and keep on declining as year-end approaches. Most of what they discuss is from the series of papers that they have recently come out with in highly reputable journals like the Journal of Finance.

Which then obviously brings us to what is the importance and why then one needs to read this book. To tackle the easier part first, while more or less everything discussed in the book is already present in the various academic papers, the authors do a good job of tying up things together and also simplifying the conclusions so that even a not so erudite reader can understand their work.

More importantly, they are amongst the first to develop a model for all-pervasive behavioural tilts that take markets away from rational efficient markets. In other words, the book establishes that while decision-makers react objectively to useful information, they do so in a distorted manner. And this distortion, to an extent, is along well-expected lines, which can be a formalized in a simple model based on the concept of representativeness.

The concept of representativeness, which was originally proposed by Kahneman and Tversky.

Here, is a type or trait which is compared across a group and the comparison group -G. A motivating example is red hairs. Proportion of people with red hairs is quite small globally, less than 1%. However, when it comes to Irish people, this proportion is 10%, small but much higher than rest of the world. As a result, red hairs have come to become a stereotype associated with the Irish. As soon as red hairs become a defining trait, conclusion is that person is of Irish origin. This is because this hair color has the highest likelihood ratio:

Here h represents probability density of a particular type T being trait . What θ represents here is the extent to which underlying likelihood get distorted because of our beliefs (hence called distortion parameter). For example, if the likelihood is originally 10 but in surveys it comes out as 100, the value of theta is 10. Theta represents the extent of probability distortion. As a consequence, as soon as we know a person is Irish, we assume his hairs are red, even though the segment is minority among the Irish as well.

Another motivating example is medical tests. For any specific test, even if a person has tested positive, likelihood of he/she having a condition is small. However, because of belief distortion as soon as anyone is tested positive, he/she is pronounced sick.

How does this get extended to financial markets? Taking GFC as the motivating example, in the long run it is known that inflation adjusted home prices tend to remain constant hence real price appreciation is close to zero. However, in the short run, there can indeed be high price appreciation. A recency-biased forecast of home prices in the near term would put much more weight on recent trend and ignore long term evidence. As prices appreciate there is more lending and more leverage, while probability of disappointment keeps on rising. Eventually, when these expectations are not met, we can potentially enter into a crisis type situation as expectations are revised. Infact, because of recency bias, expectations become over pessimistic and conditions deteriorate more than what equilibrium would suggest. Eventually, pessimistic forecasts are beaten, and conditions recover as economy reverts to longer term equilibrium.

In run up to 2007, three forecasts were well established – 1) Housing prices continuing to rise 2) MBS were safe 3) Fed would manage the economy and there would be no deep recession. Forecasts 1 and 2 were challenged when subprime lenders started filing for bankruptcy in 2007 and forecast 2 and 3 were seriously challenged when Lehman filed for bankruptcy. As negative surprises kept coming, earnings forecasts and economic outlook were revised downwards significantly. Thankfully, the forecasts weren’t realized and there was a moderate rebound.

The approach taken in the book has several strengths – 1) Emphasises the usefulness and need of paying attention to survey data 2) Recognizing cognitive bias as a source of problem other than much blamed weak regulators and greedy bankers 3) Proposing a generalized framework which can be taken to other manias like TMT as well.

But at the end this, I think, is start of new strand of research than a final conclusion which authors very well recognize in the last chapter of the book. One problem for example is how to find out the distortion parameter? In the papers, it is backed out using insample fits. But that doesn’t qualify for real testing. Second, inspite of being recent, authors don’t show any evidence of same phenomenon playing out during say Brexit or Euro Crisis.

Finally, it seems conclusion can be overtly hard on investors and savers. At one stage authors mention that “…the booms and the busts are generated on the supply side: Savers expectations become inflated in good times and are met with excess debt issuance, but then systematically deflated leading to a bust…”. This conclusion while part true is not independent. There is enough evidence of banks misselling products and credit rating agencies being held captive by banks for business generation.