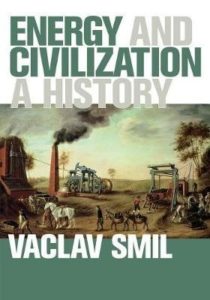 “Energy and Civilization: A History” is most likely close to 40th book by Prof. Vaclav Smil, who can be considered one of the most influential writers of our time. No wonder another influential personality of our time, Bill Gates writes about Vaclav Smil – “I wait for new Smil books the way some people wait for the next ‘Star Wars’ movie.”

The book stands in a sharp contrast to the present-day trend of -1) overstated titles and pittance of a delivery, and 2) promise of read 200 pages and you are a master. This book does full justice to its title. Energy and Civilization is a monumental piece of work. The text runs 460 pages with another 70 pages of referencing. The book is replete with charts, diagrams, and plethora of calculations and the grey highlight boxes.

The central theme of the book is the less appreciated but a close and strong link between humans’ ability to harness energy more efficiently and from more diverse sources and our cultural and economic progress. At the end, you can’t just stop wondering if global domination is itself about energy domination (why else would the counties invest so much in securing their energy lines). The scene of four ships entering Edo Bay, roaring black smoke into the air and capable of moving under their own power comes into the mind. The episode deeply frightened the Japanese and forced them to modernize. Rest is history. More recently, the support of democratic powers for authoritarian regimes (with ample energy resources) is well known. This reductionist view is taken to its extreme when Smil states that “To talk about energy and the economy is a tautology: every economic activity is fundamentally nothing but a conversion of one kind of energy to another, and monies are just a convenient […] proxy for valuing energy flows.”

Opening chapters in the book can be a bit of slog. First chapter provides the background knowledge for what is to follow. It discusses energy fundamentals like measure of energy flows and principles of energy conversions. The following hundred pages can seem very slow, it is as if human history is playing in real time with eons passing gradually. Second chapter focuses on 1) energy efficiency of gathering nuts and berries versus hunting for stags 2) Why certain societies turned to farming and certain continue to be pastoral/nomadic.

Third chapter focuses on traditional farming which discusses how different routes to increased energy intensification were taken and what was there impact on farming efficiency. These include use of draft animals, irrigation, first fertilizers and crop diversity. Fourth chapter focusses on use of wind and waterpower by preindustrial societies. It also dwells upon pre-industrial modes of transport like sail ships and early artillery and guns.

The narrative picks up pace once mankind learns to harness the energy of fossil fuels – first coal and eventually crude oil. One almost feels as if it has to do also with the fact that by dramatically raising energy accessible to mankind, these fuels hastened the pace of human advancement. As the author notes – “By turning to these rich stores we have created societies that transform unprecedented amounts of energy. This transformation brought enormous advances in agricultural productivity and crop yields; it has resulted first in rapid industrialization and urbanization, in the expansion and acceleration of transportation, and in an even more impressive growth of our information and communication capabilities; and all of these developments have combined to produce long periods of high rates of economic growth that have created a great deal of real affluence, raised the average quality of life for most of the world’s population, and eventually produced new, high-energy service economies. “

After discussing the development and impact of steam engines, gasoline engines and fertilizers author comes to the present situation. Author warns about the unabated energy intensification leading to global warming. He also highlights that we are not using energy as efficiently as we can – “Urban car driving, preferred by many because of its supposedly faster speed, is a perfect example of an irrational energy use…. with well-to-wheel efficiencies well below 10%, cars remain a leading source of environmental pollution; as already noted, they also exact a considerable death and injury toll.”

He goes on to discuss the harm caused by mindless consumption – “Modern societies have carried this quest for variety, leisure pastimes, ostentatious consumption, and differentiation through ownership and variety to ludicrous levels and have done so on an unprecedented scale”. One interesting fact that author shows is the fact that quality of human life (as measured through human development index) tops out when energy consumption reaches 110 GJ/capita. In contrast, economies like United States are consuming 300 GJ/capita. Implicitly, close to 200 GJ/capita of energy is being used for non-mandatory consumption.

The book ends on a solemn note. The author asks for less energy intensive future and rational consumption where there is a delinking of social status and material consumption. Reality however is not lost on the author that such an outcome is extremely unlikely. He also has harsh words for techno-optimists – “Techno-optimists see a future of unlimited energy, whether from superefficient PV cells or from nuclear fusion, and of humanity colonizing other planets suitably terraformed to the Earth’s image. For the foreseeable future (two-four generations, 50–100 years) I see such expansive visions as nothing but fairy tales.”. The author also mentions the fact that given current food requirements, it is just not possible to go back to the age of traditional farming given the intensity of fertilization and irrigation which sustains current world population. Overall, it seems that author is not convinced of current ways of consumption and population to both sustain simultaneously.

As a criticism, author seems to underappreciate possible use of nuclear or renewables in the near future. That is also evident by the amount of page space given to these options. While author notes these efforts, he notes that “as with all other energy transitions. Moving away from fossil fuels will be a protracted process, and we will have to wait to see how difference conversions will evolved to claim key roles in a new energy world”. Clearly, he is a sceptic when it comes to nuclear or renewable playing a dominant role in our economy.

To end, the author is aware of his reductionist approach linking the whole history of mankind with energy consumption – “All-natural processes and all human actions are, in the most fundamental physical sense, transformation of energy … What is much more challenging is to find a sensible balance between seeing history through the prism of history imperatives and paying proper attention to the multitude of nonenergy factors that have always initiated, controlled, shaped and transformed human use of energy”. The author’s deep grasp of the subject matter is the book’s greatest asset and liability. The reading is dense, and times can be monotonous, given the lack of any stories or anecdotes. Overall though, the book will remain a definitive read for anyone with interest in the subject for years to come.