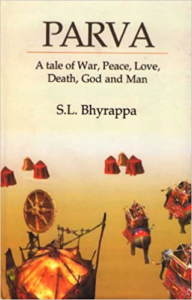 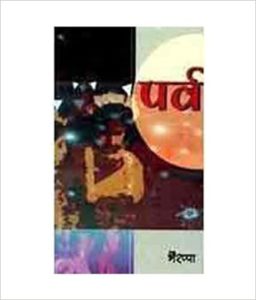 The review below is for the Hindi Edition.

Decades ago, before India caught on to the current epic retelling craze (thanks to Amish and Devdutt Patnaik), S.L. Bhyrappa wrote a reconstruction of Mahabharata in Kannada in 1979. The book was titled Parva. The most common meaning of the word Parva is festival but be aware that there is no festival in this dark and grim reconstruction, which is devoid of gods and superheroes. In this retelling, everyone is out to reach their own selfish goals, with whatever means possible. Parva, in this regard, can be more construed as either a chapter or a chance.

Krishna here is not a god, but a smart and cunning politician, who deeply understands the human psyche. Arjun is an over-sentimental warrior with a streak of impetuousness, which regularly puts Pandavas into danger. Gandhari has been caught in a “devi” syndrome, where she has been enslaved by her own created image of a devoted wife to a blind husband. Yudhishthira is struggling like all of us, where he knows his weakness but still can’t get rid of it. Elderly Bhisma, Drona, and Vyasa are not able to get rid of their false pride until the very end. Far from an ideal lot, Pandavas are engaging in vain gloriousness, trickery, greed, and rashness. The book may force you to wonder how different they are from arch-rival Kauravas.

The book is written differently from most retellings that follow a traditional linear flow, starting from the birth of great-grandfather Bhisma to the end of the great war. Parva instead is narrated as a series of flashbacks and reminiscences. The narrative begins a few months before the war, when the preparations are at full pace and ends just after the war. Each chapter focusses on one character – Draupadi, Arjuna, Bhima, Karna, Satyaki, Bhisma, etc.

The effort author has put in not only in the understanding of motivations and relationships of different characters but also in grasping the society of that time is evident. Characters recall the past, trying to fully justify his or her actions and how they feel about the war. Each chapter is full of new revelations into the main protagonists –

The war here does feel like a real war, not some other-worldly act by gods. The author discusses how the geography of Kurukshetra greatly benefitted Pandavas, how there was a vast difference in the morale of those fighting for the Kauravas as compared to those fighting for the Pandavas and how each side engaged in tactical blunders and equally grotesque trickeries. The war zone here is stinking with decaying corpses and carcasses and human and animal waste. Vultures and hyenas are always scouting for food, food and water shortage is rampant, and there is little sympathy for the enemies or the abducted women from the villages.

The author also spends a lot of time discussing the changing social fabric of that time. As the story moves ahead, certain long-held traditions like “Niyoga” are finding resistance. Sutas – a caste between Vaishyas and Kshatriyas are rapidly ascending social hierarchy, becoming kings and queens. The original ruling class of Kshatriyas, long accustomed to the exploitation of sutas is finding this troubling. The unequal relationship between city-dwelling “Aryans” and forest-dwelling – rakshasa, nagas, and nishads is also presented clearly. Bhima is probably the only main character, who has some love for rakshasa (being married into the community), the rest of the characters have no love while lost in their exploitation (Eklavya) and slaughtering (Khandava Vana).

The first 550 pages are a treasure trove, but a long 15-page paragraph at the end is the masterpiece. It is as if the theory of karma has finally come to its logical conclusion, and Kauravas are luckier to have died. As we approach the end, Draupadi, who has been thirsty for the blood of the Kauravas, loses all her sons in a gruesome murder. If that is not enough, she finds that there is no one to cry over the killing of all her sons, including her husbands. The line of Pandavas has come to an end after the birth of a still-born grandson, while Yudishthira has to answer thousands of ladies who have been pregnant after being abducted and raped during the war period. Bhima reaches Hidimbavan, where his son and wife once ruled, only to find that the forest has been cleared by Aryans just like Pandavas cleared Khandava Van. Yadavas reach back to Dwarka, only to kill one another over small differences, just like Pandavas-Kauravas.

In the end, really, it almost seems like the difference between winners and losers is minor, whether when they were alive or when they died. The Kauravas at least escaped the misery of ruling over a decimated society – morally or economically.