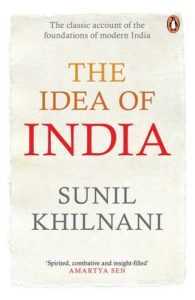 The book makes us challenge the contemporary trend of looking down upon Jawaharlal Nehru’s achievements. At the same time, it discusses the complicated origins of the modern-day Indian state.

The book traces the development of Indian state mainly since 1947. This book is not a chronology of events, but the author`s view about how the Indian state evolved and where it is heading, which he explains with total confidence. Why since 1947 only? Author minces no words about the fact that the concept of India as a unified, independent state arose only in 1947. Before that, India was more of an abstract concept linked to cultural continuity across large geography and a sense of shared past through this large expanse. As the author explains, this was because the social setup was such that the ruler could only seek rent and not interfere much with the social life of the people. As a result, while there was cultural & social continuity across time and space, political continuity was fleeting at best. The arrival of British changed that as the state incrementally started making inroads into every aspect of the life of its citizens.

For someone like me born in the 80s, the Nehru and the Indira era are best an imagination with not much understanding of why, what and how. However, this is precisely the period when the foundation of modern India was laid. The book doesn’t dwell about the time around partition but makes it clear that it was not that at time of independence, the political leaders had a very well-defined clear idea of what route was to be taken, and the wounds of the partition further added to the complications. There were three camps of the potential direction of the nation – Gandhi (who wanted to move back to the rural setup with a highly decentralized state), Bose (with a heavy dose of nationalism) and Nehru-Patel (with focus on Industries and a strong centralized state).  Even within Nehru-Patel, there were ample differences (for example Patel curtailed any chances for a serious land reforms program, whose ill-effects we are still facing). For good or bad, within a couple of years, Nehru was left alone to steer the ship. And that is why Nehru is so central to the evolution of the Indian state.

Nehru made sure that democracy survived even if it came at the cost of slower growth and lack of critical reforms. The author spends a lot of time to address a common complaint about why Nehru didn’t achieve more in spite of having a big majority for over fifteen years. The author mainly blames it on the fact that while Congress had a large majority, it in itself was a decentralized organization with strong state leaders. At time of independence, while the center was ruled by anglicized urban elite like Nehru, the real economic and voting power was vested with these state leaders, who often came from landowning class. As a result, it was not so easy to push an agenda by the center, which may be against the liking of states (e.g. land reforms). This led Nehru to actively engage in bureaucracy (something he wanted to dispense with earlier). Over this period, Nehru made sure democratic principles are followed, disagreement is allowed, and authoritarian urges are kept at bay.

Things, however, started to go downhill once his daughter was selected by the syndicate (a group of influential state leaders in Congress) as the prime minister of India. To take the syndicate out of the picture and make it less effective, Indira directly started appealing to the citizens along the religious, caste and economic lines (divisions deliberately not invoked by Nehru at the central level and left to the state leaders to work out). Since then, the deterioration in the quality of democratic setup continued unabated. Democracy has come to mean elections, promising sops to everyone, rise of parties along regional and finally religious lines. In an ironic twist, democracy has led to the arrival of various ideologies which seek to dilute it.

I would, however, like to add that the author`s love for Jawaharlal Nehru makes him ignore several shortcomings in his leadership, which are largely glossed over in the book – inept handling of Kashmir issue, lack of realpolitik skills and the Sino Indian war. To me, more importantly, Nehru never invested in making a second order of command which left a power vacuum when he left. The author even goes to the extent of giving Jinnah the benefit of doubt, by hinting that his hand was forced by the Hindu nationalists within and beyond Congress. The other criticism I have is on the chapter on Cities, which while enlightening is the weakest in its linkage with the author’s narrative. The chapter can easily be dispensed with without any effect on the author`s argument and narrative.

Overall the book is interesting, including the trivia you pick up along the way, very well written with the author presenting his view with full conviction. One may disagree with his view of Nehru as the true hero of independent India, but one cannot escape the fact that Nehru`s shadow rules large in Indian politics. He may have had shortcomings (who doesn’t), but it was to his efforts that we now have a well-functioning democracy which has flummoxed the great powers by its existence for so long.