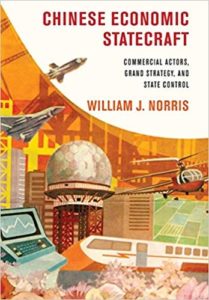 This gem of a book discusses how state control of the large corporations and asset owners can help the state achieve its longer-term geo-economic goals. On the surface that may seem to be a good outcome, but the downside is the potential capital misallocation and less favorable image in the international arena.

This book by Prof. William Norris was originally written as an academic thesis, so like any academic paper, it has a hypothesis, framework, methodology and results section. However, this should not dissuade a general reader with interest in intersection of economics, finance and politics. It just so happens that China provides ample number of cases for the author’s hypothesis to be tested and hence China is the focus. But the structure can be used for any other country as well.  My only gripe with the book is its cover. The book is not at all about fighter planes, helicopters, etc., it is about economics and politics.

At its heart, the book examines how states implement economic statecraft (use of economic tools to pursue foreign policy objectives), focusing on the case of China. What comes out is the critical role economic actors like large corporations, and asset owners play in the pursuit of economic statecraft. In China’s case, the state’s ability to direct the activities of these economic actors because of financial and administrative control increases the likelihood that China uses these economic tools/actors to achieve its foreign policy goal. However, the author shows a swift success is not always guaranteed, and the results may turn out to be opposite of what was intended. More importantly, what comes out is that China is willing to learn from experience and change the approach undertaken.

According to the author, following five factors affect the business-government conditions and how the government can control commercial actors:

These five factors are then tested using the following case studies:

In the end, the book discusses the origins of several heavy-weights in China`s financial landscape – SAFE, NSSF and CIC and discusses why some of them may be easy to use as a tool of economic statecraft (SAFE), and some may not be (NSSF and CIC). I found this section highly fascinating and insightful.

The overall picture that emerges is full of variation, depending on how the five factors align. In some cases, the goals were achieved, in some cases where achieved with large side effects and in some cases, they were not achieved at all. As China continues to rise in global influence, it may be useful to apply the framework to new initiatives like the CPEC and the OBOR.

In some sense, there is nothing unique about China’s use of economic statecraft. Every powerful or rich state uses it whether the United State (Marshall Plan, Weaponizing the Dollar) or Japan (Huge low-interest loans to interested countries). Everyone uses it, depending on their strength and weakness.  In China`s case, its control of the large corporations and asset owners is the strength.

And similarly, every tool has its downside as well. In China`s case, it comes through in the form of poor capital allocation, return on equities and corporate leverage. It can also result in a less favorable international image (as seen in recent pushback from Malaysia, Sri Lanka, and the Maldives). But again, this is no different as in the case of the United States, where unilateral tariffs and sanctions (for e.g., on Iran) and frequent use of US Dollar as a weapon can have negative longer-term consequences.