Our Leadership Conclaves are a platform for dialogue between research and practice. We will focus on building a shared perspective on issue of contemporary interest and outline the agenda for future research in the area. Each of our conclaves is a ‘by invitation only’ programme spread over one or two days, depending on the number of sessions being covered.

Leadership in a Growth-constrained, Information-Age Economy

At this inaugural meeting, we focused on choice of strategy in a growth-constrained environment, which is also characterised by the emergence of a wide-range of digital technologies that can potentially disrupt the existing business models and value-chains.

We explored the following questions during the August Meeting:

During the last seven years, we have been growing at much slower pace than the pre-crisis seven-year period. Charts 1 and 2 below provide the picture of global growth rates for per capita GDP in current as well as constant $ purchasing power. 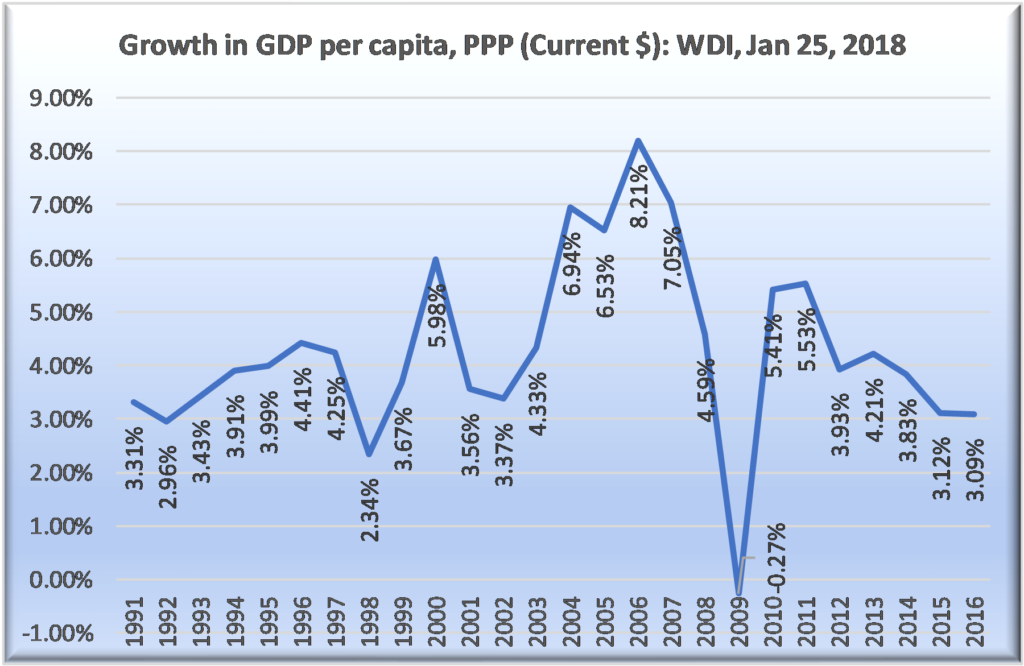 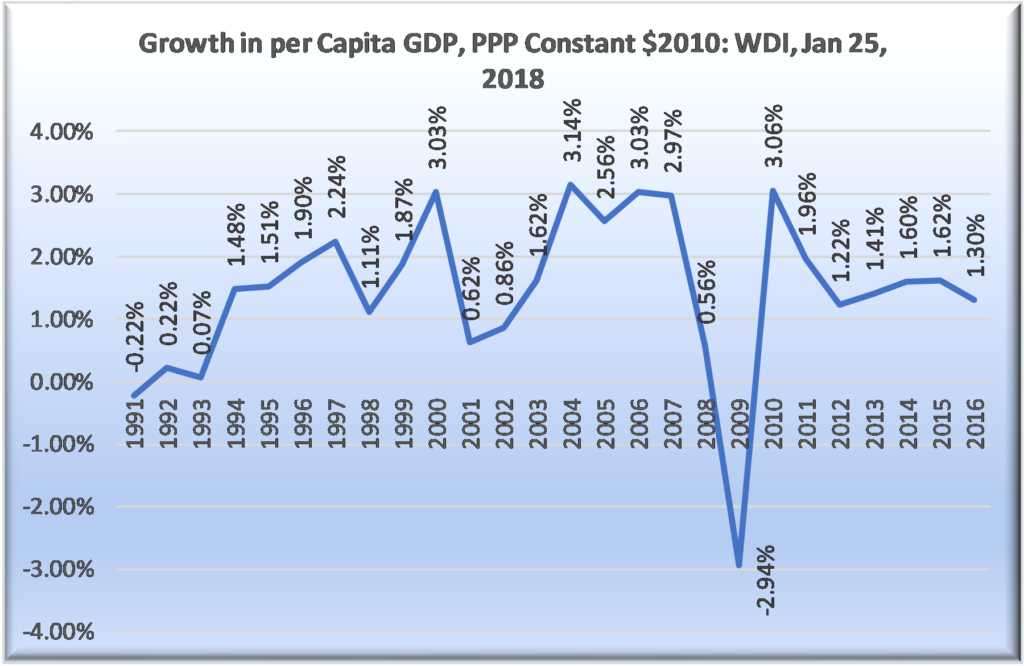 Global Economic Prospects (GEP)[1] suggests that, “for the first time since the global financial crisis, all major regions of the world are experiencing an uptick in economic growth.” At the same time, the report states that “stepping outside the frame of short-term forecasting, the GEP observes that growth in investment and in total factor productivity (TFP) has been declining over the past five years. This means that potential output – the amount the economy can produce if labor and capital are fully employed – would grow at a subdued pace in the future…..To arrest and possibly reverse this decline in potential growth, emerging market and developing economies need to accelerate investment in both physical and human capital, especially if TFP growth is likely to remain anemic.” GEP points out that “private investment is often constrained by the lack of infrastructure. And infrastructure investment has been limited because governments lacked “fiscal space”. The report further points out the following:

“Despite a recent acceleration in global economic activity, potential output growth is flagging. At 2.5%, 2013-17 potential growth was 0.5 percentage point below its longer-term average and 0.9 percentage points below its average a decade ago, with an even steeper decline in EMDEs[2].”

While the growth rates in India, Asia’s third largest economy, have been much higher than the global averages, the underlining conditions are not very different from the ones outlined above in the GEP report. Private investment is yet to recover, as the financial leverage for a large number firms remains high and the growth in consumption is yet to reach the earlier levels. The government is focused on balancing its budget, fearing inflation and the consequent impact it can have on exchange rate stability. Increased credit availability and lower interest rates have not helped, as many sectors are still carrying excess capacity.[3] Charts 3 and 4 below provide a picture of recent growth in per capita GDP in India. 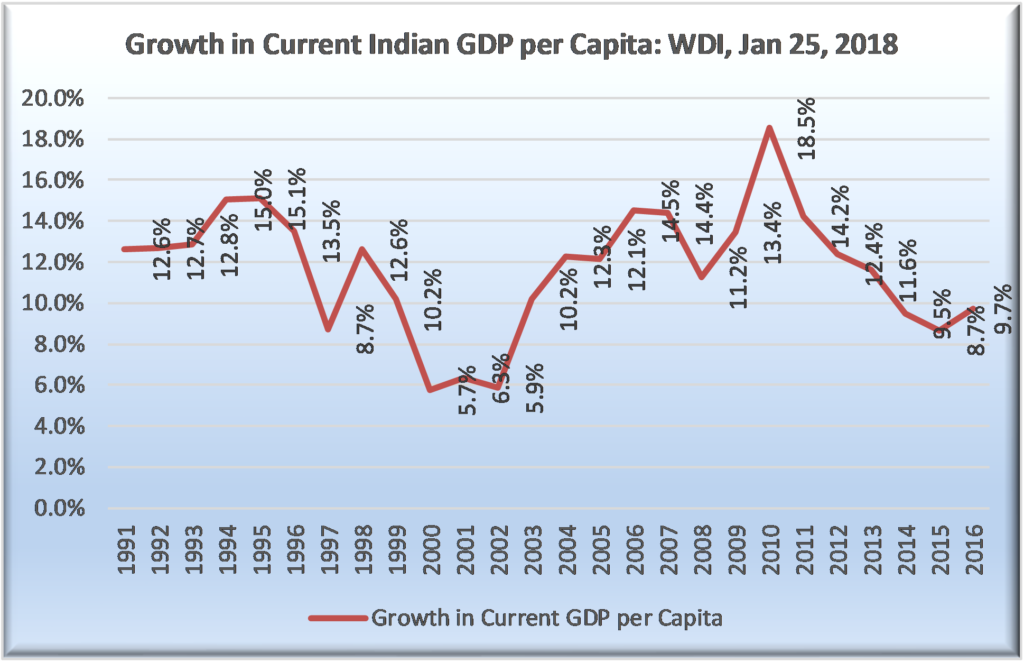 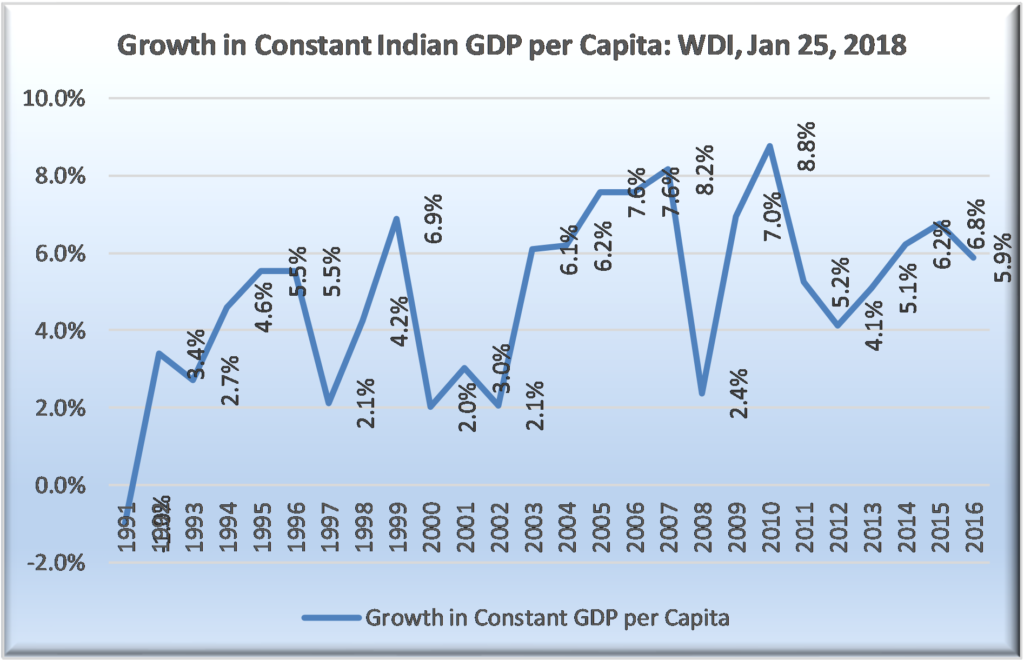 We, at IASCC, characterise the present environment to be a growth-constrained environment, i.e., we are missing the tail winds. We argue that it would now take intense conscious effort to take the economy (global as well as the Indian) back to higher potential and realised rate of growth.

It is during this growth-constrained environment that we have entered the next phase of the information age. Digital technology is not only disrupting the existing value-chains and creating a new set of choices of consumers, it is also providing a new set of means for social and personal communication and thereby impacting personal as well as social preferences.

S&P’s Global Corporate Capex Survey while reporting an upturn in global capital expenditure spends notes “an interesting confluence of investment intentions here; arguably the industries that are competing in the same space, with new technology disrupting the auto and retail sectors,”, which has implications for choice of specific investment programmes in these businesses. A survey on Industrial Capital Expenditure by Arcadis outlines the need to “put design at the center to improve flexibility and agility” and “invest in continually improving supplier engagement, innovation and communication to align them to business goals.”

In short, we are living in a growth-constrained, information-age, where our strategic choices need to be different than in the past and be guided by a different set of criteria. It is observed that the firms that invest (in growing through organic and/or acquisition-led strategy) consistently across business cycles deliver higher value for their customers as well as shareholders.

At the Conclave we will focus on identifying the underlying causes that are limiting the short- as well as long-term growth potential. In the simplest form, the determinants are investment choices of individuals in personal, organisational and public policy context, as these choices determine their earnings and consequently the consumption and investment levels in an economy. While credit can accelerate growth in consumption as well as investment for some time, it is not a substitute for earnings.

[3] Globally too, we continue to carry excess capacity in many industries.