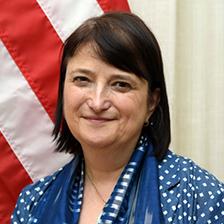 She also worked in various capacities in Washington, including as an Associate Dean at the U.S. State Department-run Foreign Service Institute, a fellow in the U.S. Congress, and a trade negotiator in the U.S. Trade Representative’s Office, a branch of the White House.  Her final diplomatic posting was as Consul General in Hyderabad, India.

Born and raised in New York City,  Ms.  Hadda received a B.A. in Sociology from Smith College and a Master’s in International Affairs degree from Columbia University.   She studied Mandarin Chinese in Taiwan as a graduate student and a Italian as a diplomat, and has working proficiency in both languages.

As a senior diplomat who closely observed the work of government officials in a variety of countries, Ms. Hadda understands the importance of informed decision making as is delighted to serve on the IASCC board.